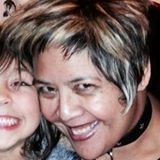 Dr. Melinda Luisa de Jesús is Chair and Associate Professor of Diversity Studies at California College of the Arts. She writes and teaches about Asian American cultural production, girl culture, monsters, and race/ethnicity in the United States.

She was recently awarded the 2018-2019 Muriel Gold Senior Visiting Professorship at the Institute for Gender, Sexuality and Feminist Studies at McGill University in Montreal.

She is also a poet, and has published five chapbooks Locofo Chaps/Moria Poetry in 2017: Humpty Drumpfty and Other Poems,  Petty Poetry for Scrotus’ Girls, Defying Trumplandia, Adios, Trumplandia!, and James Brown’s Wig and Other Poems.  Her poems have appeared in Rat’s Ass Review, Konch Magazine, and Rabbit and Rose.

Her first collection of poetry, peminology, was released by Paloma Press in March 2018.  More about her poetry is available here.

In 2011-12 she was the Fulbright Visiting Scholar at the Centre for Women’s Studies, University of York, UK, where she convened the international conference After Girl Power: What’s Next? in February 2012.

She is a mezzo-soprano, a mom, an Aquarian, and admits an obsession with Hello Kitty.